Day 3 in Chiang Mai sees us embark on an incredibly loooooong drive to Chiang Rai, known as “the gateway of the Golden Triangle”, being the place where the borders of Thailand, Burma and Laos meet, with the Mekong River intersecting the three countries, made famous by the opium trade of yesteryears.

It is a good 180 km from Chiang Mai and the drive took us all morning to get there. In hindsight, a night or two there would have been a better way to see Chiang Rai, but we managed to have quite an adventurous day.

First stop and most welcome after a good 5 hour journey in a thankfully comfortable van and some really good company, was the shimmering, all white temple of Wat Rong Khun, made from white plaster and studded with white mosaic mirrors, meant to signify the purity of Buddha. Although, I have to admit that I did find the images of the giants and the saint with the whirling winds of karma slightly disturbing… 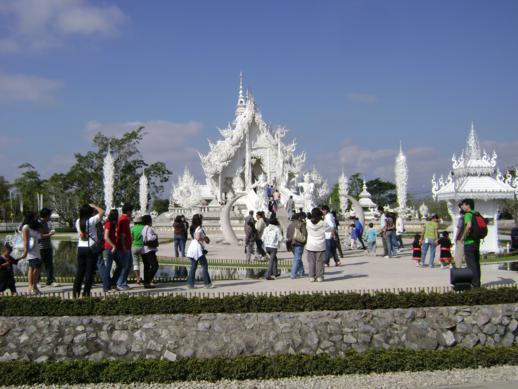 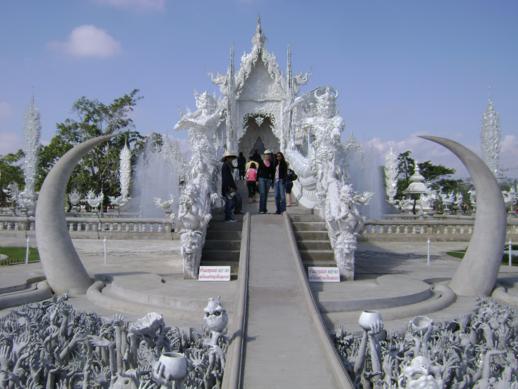 Our destination, Chiang Rai is studded with greenery – the hills seem to go on as far as the eye can see, shrouded in mist, almost making time stand still. It would appear that one of the only reasons to come to Chiang Rai is that it is along the Golden Triangle, the former opium route between Myanmar, Laos and Thailand, and the ease with which one can place a mini footstep into Laos, across the Mekong river is a good reason to make the trip. 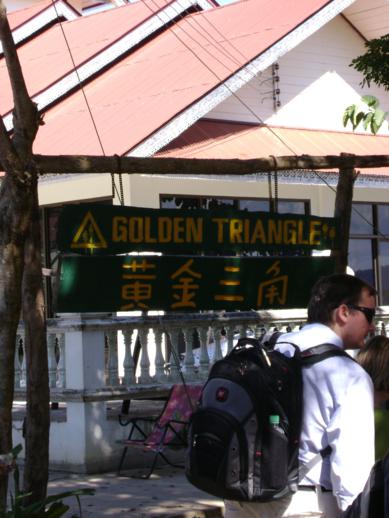 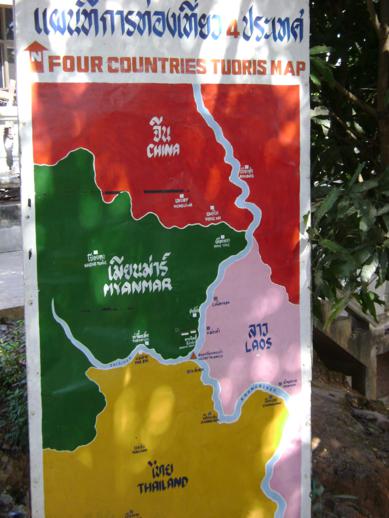 A boat with a guide who loves to make stale jokes and then say “juss kidddinnggg” winds its way along the Mekong to Laos, past a giant solid gold Buddha on a boat the Thai side. What that signifies, I don’t know but it did look quite colossal. 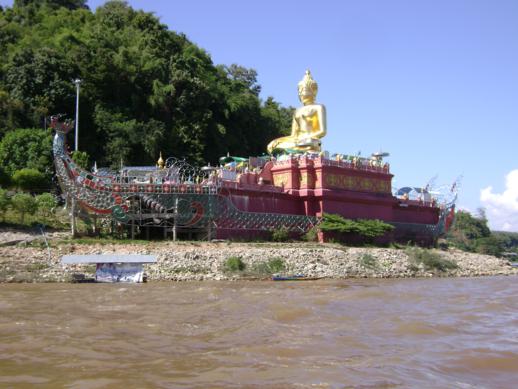 A mini footprint in Laos – how awesome! 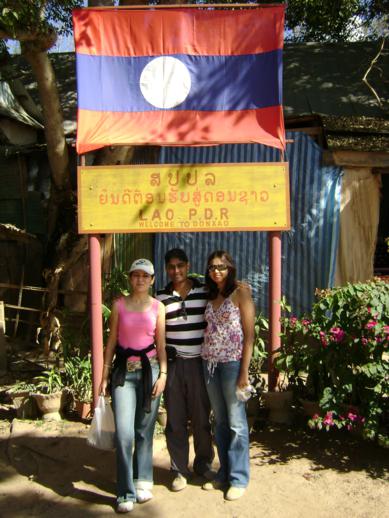 …but even more awesome is the snake whisky and tiger penis whisky that was on sale in the shops on the border. They were offering samples to taste but sadly, neither M nor I were brave enough to try any! And me, being an Ophidiophobiac, make a hasty retreat out of the shop on catching a glimpse of a cobra head! It is hard enough to put this picture up…..eeek! 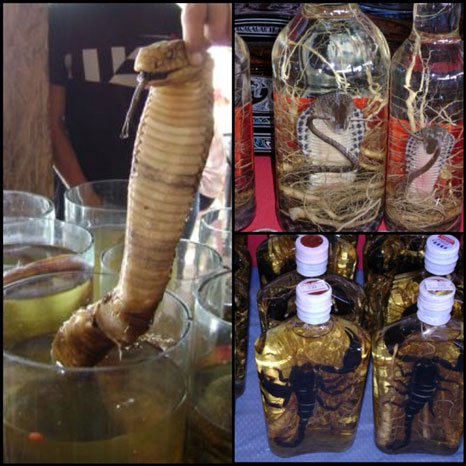 Anyhow, if you do manage to take this trip up to Laos, do carry your passport as you can add another stamp to its pages. Sadly we had locked ours in the hotels safe, fat load of good it did us that day!

A quick spot of buffet lunch (again) later we were on our way to the little town of Mae Sai, smack on the border of Thailand and Myanmar (Burma). This is a one street town crowded with buses and food stalls, but there is a very good panoramic view of the entry point into Burma, from atop the Scorpion Temple built as legend has it by monks who found a tonne of scorpions in the area. But the fact that the giant scorpion faces Burma brandishing its claws is quite interesting… 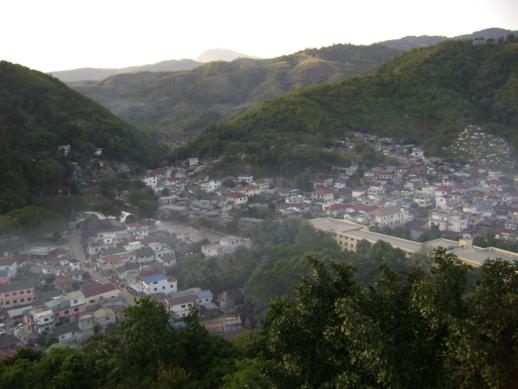 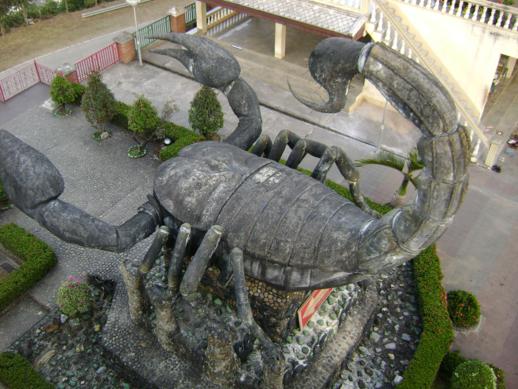 After what seemed like hours driving through the winding hills of Chiang Rai, just before dusk, we reached the Karen Hill Tribe, or better known as the “long neck tribe”. From the age of 5, young girls are made to wear the coils which weigh a tonne and weigh down the shoulders, creating the long neck. Every year, another ring is added. We were fortunate enough to meet with the oldest woman in the tribe and she had such a distant and sad look in her eyes…she did mention that the coil she wore weighed over 40 kg– imagine carrying that weight on your neck your entire life! M and I left the village feeling quite sad and incredibly blessed. Such a visit does tend to put life into perspective.

The ride back to Chiang Mai seemed to go on forever and we got back to the hotel past 10.00 pm….would I recommend a day trip? Definitely not, if you can avoid it. Luckily the Chiang Mai night market bustles on until midnight so M and I wandered back to get a quick bite of food and shop – I bought some amazing hand made jewellery and M got some relaxing music that brings back the Thai Holiday Blues every time we listen to it. 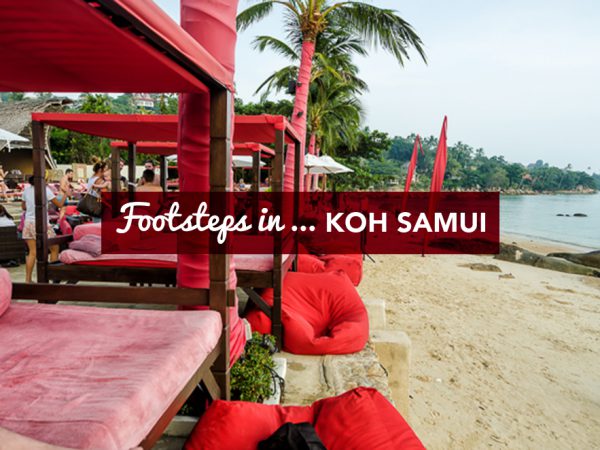