We woke up at the crack of dawn to board the flight to Abu Simbel. I did not envy the hoardes of tourists preparing to make the long 5 hour bus ride to Abu Simbel. Anyhow, the great temple at Abu Simbel was built by Pharaoh Ramses II, probably the most narcissistic of all the Pharaohs in Egypt – his statues were pretty much everywhere we went!

The temples were originally carved into the mountainside however, are now a UNESCO World Heritage Site and had to be moved, stone by stone in its entirety to an artificial hill above the Aswan Dam to avoid them from being submerged during the creation of Lake Nasser. 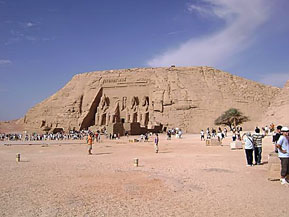 The entrance to the temples are flanked by four colossal statues of Ramses II seated on a throne, each 20 metres high. It is worth making the additional trip to Abu Simbel just to oogle at the grandeur of these temples and soak in the enormity of it all. The inner part of the great temple has beautiful paintings on the walls, and is constructed in such a way that on each solstice, the rays of the sun could penetrate the temple and illuminate every statue at the back of the temple except that of the God of the Underworld, which remains in the dark. Pretty darn smart! 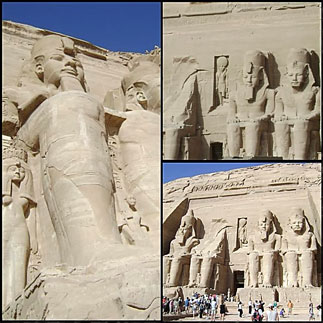 The small temple is dedicated to Ramses II’s queen Nefertari and is flanked by four statues of the king and his queen, but are only 10 metres as opposed to the grand 20 metres of the great temple. 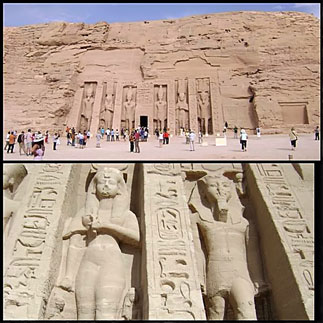 It got really hot in Abu Simbel (we were quite close to the border of Sudan) so a cold coke was welcome, before boarding the plane back to the Tamr Henna. Once aboard our “tamr” (as we fondly nick named this ship) we were (courtesy of my bridal bangles again) taken to the bridge to say ‘ahoy’ to the captain! We met a rather quiet and weather beaten captain who nodded his salaams… but it wasn’t the captain I noticed – but rather, noticed with dismay that none of the instruments on board the deck were working and there were no maps or radar!! It is a good thing that the river captains know the Nile like the back of their hands which is a slightly (and I mean slightly) reassuring thought… 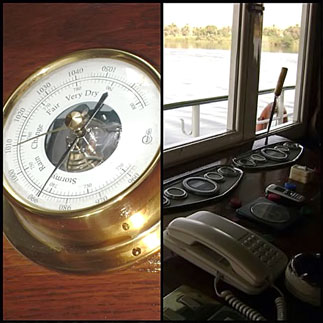 We were cruising towards the Esna Lock, to cross over into the part of the Nile leading to Luxor. I had learned about the Esna Lock in history class and to be able to see what the lock actually does was fascinating. we were lucky that it was low season and we got to cross the lock in record time – we had been told that as only 2 cruisers can cross at any given time, the crossing can take up to 3 hours!

Anyway – the level of the river Nile drops at Esna, and in order for the ships to be able to pass through, the water has to be levelled. This is done by a gate which is closed, and the water level is somehow raised and then lowered. Once the water level is lowered, the gates are opened again and the ship can then pass in a single file across to the other side. It sounds complicated – but watching it is absolutely fascinating. There are tonnes of vendors trying to see you all sorts of stuff while you wait in line, at terribly over inflated prices but if you don’t pay them any attention they don’t bother you. 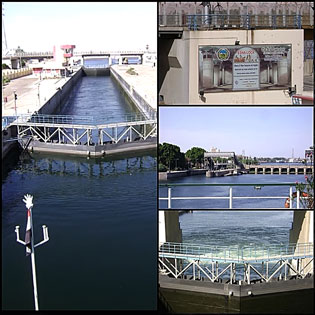 Once across the lock, we cruised steadily on to Luxor. The chef went all out on our final night aboard – the work that went into the fruit and bread carvings was phenomenal, and we got a special cake made to wish us bon voyage! That evening we had a ‘galabiya event’ on the ship, where everyone was to dress in traditional Egyptian galabiyas (costume). We had a great night with our new friend from New Zealand, Angela Shiu and the rest of our new found friends on the ship, playing various games that had been organised for us by the crew and enjoying the final night on board the “tamr”… 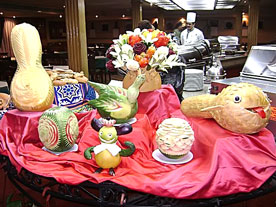 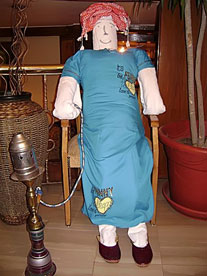 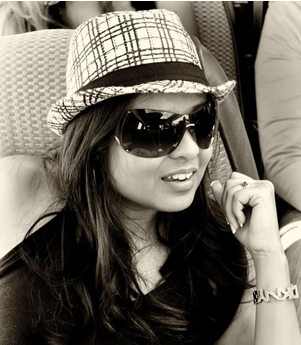