The final leg of our American odyssey had to end with the hustle and buzz of NYC. En route to NYC, we made friends with the lovely lady sitting next to us on the plane, called Heidi. She saw that M & I were reading our NYC Lonely Planet guidebook and struck up a conversation and when she heard that we were from Kenya she was very excited as she came to Kenya on her honeymoon 40 odd years ago! Thanks to Heidi we got some invaluable inside information on traversing NYC, and we shared a taxi into the city from La Guardia.

My love affair with Manhattan started when I first visited the US from Kenya, as a mere teenage girl having read a tonne of Babysitters Club books, and loving a character from the book called Stacey, who was from the big apple. I remember looking wistfully at the skyline while driving from the airport to my aunt’s house, wanting to go to Bloomingdales and Macys and Saks of Fifth Avenue and the Empire State Building! I have been to Manhattan several times since my first trip, and the buzz and electric atmosphere of the city always gives me goose bumps.

This trip though, was different from the usual day trips into the city I had made in the past because M & I stayed in the city, on 47th Street in Times Square itself. Our room was the size of a shoebox and we were jumping over our suitcases to get into bed and into the bathroom, but I guess this was part of the charm of staying in the city. 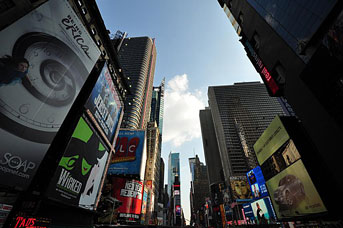 Times Square is like Piccadilly Circus in London, a tad bit bigger but more lights and vibrant atmosphere. Perhaps a tad bit over rated? But nonetheless, the larger than life advertisements for Broadway shows, and the new years ball do have a charm of their own.

The area was teeming with crowds of tourists – and was fantastic when all lit up at night. There was also a huuuuge M&M’s world and Hershey world!! M&M’s and Kisses Heaven! Times Square has got a myriad of great places to eat at and go to for happy hour and we frequented the hard rock cafe and TGI fridays. 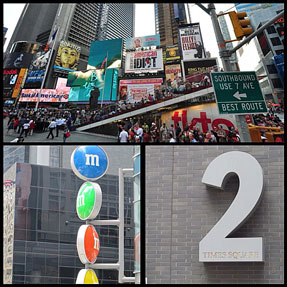 Our first night in Times Square we ate at a lovely Thai Restaurant called Nan King where we had some amazing fresh tilapia steamed with five spice and herbs, with jasmine rice which was a treat for the taste buds. Incredibly expensive though. We also learned the hard way that despite service charge being added on to the bill, the tipping culture in the city is incredibly rampant. We learnt very quickly that tips were expected, whether service charge was included in the bill or not.

One of the best ways to go around Manhattan is the tourist hop on hop off bus, “New York Sightseeing”. This is great because it is an easy way to get to see pretty much the whole of Manhattan and all the sights, and get off at a sight that interests you and get back on when you’ve had enough. The downside of the bus is the guides that literally solicit for a tip as you get off. We had a not so nice lady guide on one of the buses that gave a speech on how she went the extra mile to tell everyone a little bit about the history of the sights, and not just merely point them out like she could, and for that she deserved a tip, a culture that was rampant with all the guides on the bus that we soon learned to tune out. I have nothing against tipping for good service but I do not expect a tip to be demanded – especially when I have paid the bus company $80 for the service in the first place.

Anyway, the bus made it easy for us to see all the sights we wanted to in two days. We took a ride from Times Square and past the Flat Iron Building to The Empire State Building first thing in the morning, which was a good thing as we avoided the crowds and long lines. 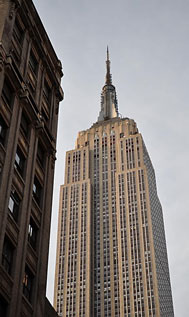 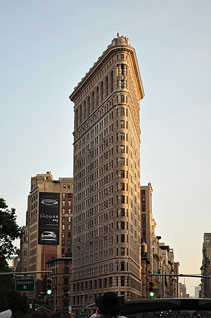 We went up to the 86th Floor observatory of the Empire State Building and got some fabulous pictures of the Chrysler Building from up there and a birds eye view of the beautiful city below, with its signature yellow cabs in the streets below and the Hudson River. I have read that a similar view can be seen from Top of the Rock at The Rockefeller Centre, but going to NYC and not going to The Empire State building would be sacrilege to me. 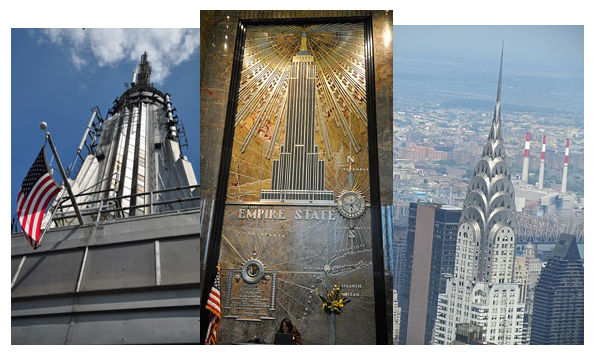 Coming out of the Empire State Building we walked along Fifth Avenue, window shopping at Saks and Tiffany’s, and all the major flagship stores that make the avenue so chic and famous. Hopping back on to the bus, we took a ride past Broadway and onward to the Natural History Museum… 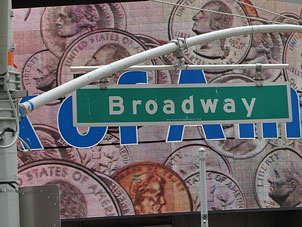 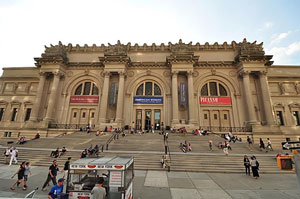 …where we excitingly, saw all the exhibits shown in Night at the Museum – Rex, the Capucian monkey, Teddy Roosevelt on the horse, Dum Dum who asks for gum gum…fantastic! 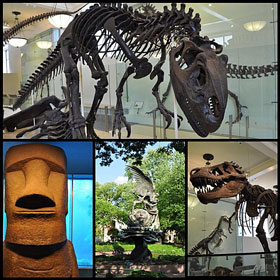 One of the entrances to Central Park can be found right opposite the entrance to the Natural History Museum. We bought some lunch from a food cart and ate it on a park bench, surrounded by greenery. An afternoon spent in the park is a good way to appreciate the beauty that it has to offer, with its lake and boats, poets avenue and the arena where there is more often than not a live band playing. 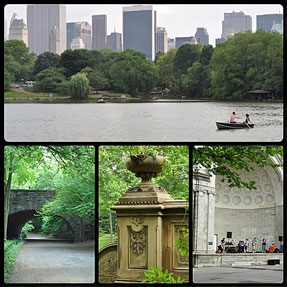 Being such a “Gossip Girl” fanatic, I just had to make our way to the duck pond and stone bridge where Blair Waldorf feeds the ducks, and I don’t know whether this is the same bridge but I loved it instantly. The tips of the buildings peeking out from the green trees are amazing and the buzz of the city seems like miles away! Our walk through the park saw us exit from opposite The Plaza hotel, with its horse drawn carriages, so incredibly romantic and very “Sex and the City” like! 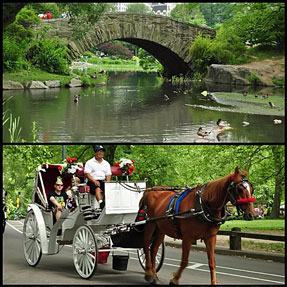 There being bus stop right outside central park, we hopped back onto the bus to catch the sunset tour of Manhattan, singing New York, New York as we crossed Brooklyn Bridge and got a beautiful shot of the skyline in the orange setting sun. 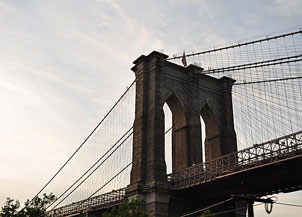 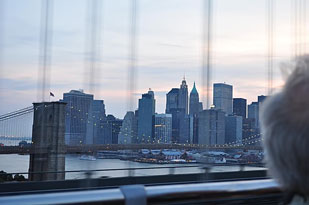 On our final day in the city, we took the circle line cruise to Liberty Island to pay homage to the lady with the lantern, the one and only Statue of Liberty. She looks tiny when seen from the top of the Empire State Building but is colossal when right up close! Security is very tight on the circle line cruise and the lines to get onto a boat are very long, but there are several boats traversing the Hudson and so the lines do move pretty quickly.

It is incredible seeing the skyline of Manhattan behind you as you approach Liberty Island, catching your first glimpse of this beautiful statue which was a gift to the United States from France, with her torch held up in one hand, and a copy of the US Declaration of Independence in the other. Standing at the entrance to the New York Harbour, it is not hard to imagine an immigrants excitement at seeing this majestic figure, welcoming them to the “land of milk and honey” as the US is sometimes called! 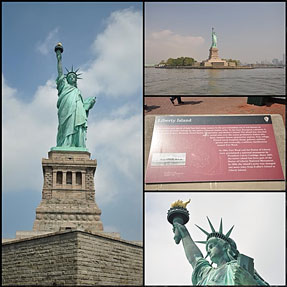 It is easy to spend a couple of hours on Liberty Island, reading the epitaphs along the edge describing how the Lady is made, and taking pictures of the Statue from every conceivable angle, and taking pictures of Manhattan yonder. Sadly access to the Torch Balcony is restricted, though if I were ever to go back to NYC I would probably google on how to get a ticket to the balcony and I would revisit the Lady.

A short hop across from Liberty Island is Ellis Island, and the Immigration Museum. Entrance to the museum is included in the ticket price so it is worth heading across to catch some snippets of history, and to use the free search engines to search the records and try and see if any of your ancestors set foot in the United States on Ellis Island as an entry point! Sadly neither M’s nor my ancestors were in any of the records there, but at least we tried and searched! 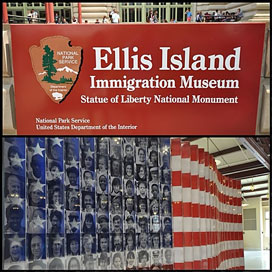 On our final night in the big apple, M took me to a lovely restaurant called the Red Eye Grill opposite Carnegie Hall. The restaurant caught our eye as we were walking around the area, and so we just stopped in and indulged! The food was great, the atmosphere was romantic and it was the perfect end to our trip in the US of A. 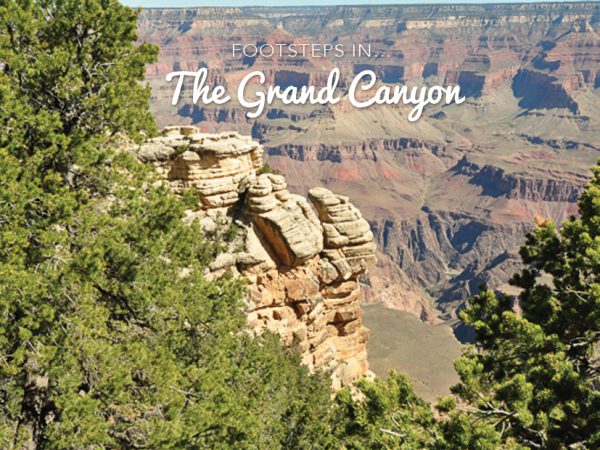 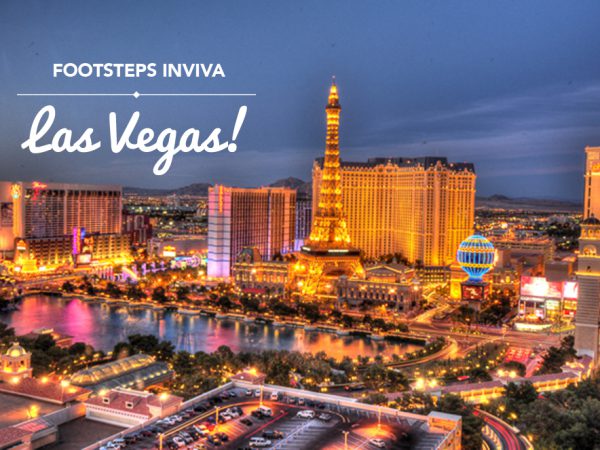 Footsteps in…the US of A…Boston Revealed!