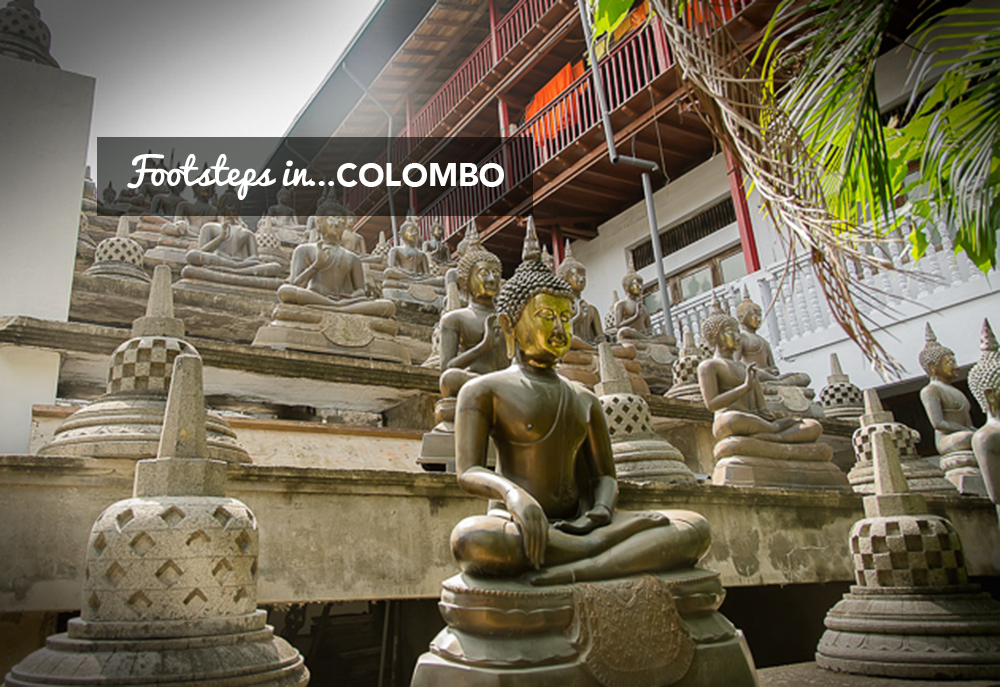 Colombo, here we come! This is it! I am in a state of disbelief at how quickly this trip has flown by…and even the 8 hour drive along the southern tip of Sri Lanka from Yala to Colombo is whizzing past! We check into Colombo in the late afternoon, in time to book a table at some restaurant in the hotel and buy some last minute tickets to the New Years gala on the beach. 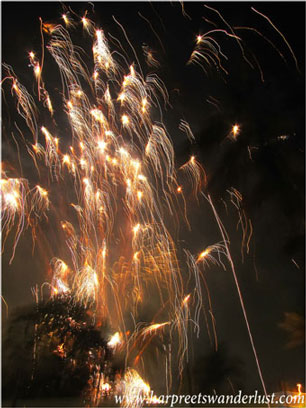 For once, our ever packed itinerary is devoid of things to do, except to chill out and wait for the year to roll on over into 2013, with a couple of bottles of Moet et Chandon, fireworks, some sparklers and lanterns and a random bunch of strangers….did I say that Sri Lankans are the friendliest peeps on earth? Yup, M and I dont even know their names, but we had a blast! 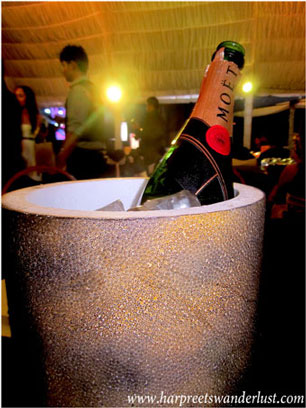 Bubbly. The epitome of a celebration.

A pounding headache, thanks to the bubbly wakes me up on the first of January 2013 and all I can think of is getting some greasy food, and shopping! Google says that the Odel is the biggest ‘shopping mall’ in Colombo, and that’s where we are headed, only to be grossly disappointed by its size….it is but a department store. Sigh. I really must stop expecting all malls to be like the gigantic ones in the USA. Odel has a couple of floors with some pretty decent stuff though – affordable clothes, a nail bar where i got a quick and cheap manicure done, and some great souvenirs. And a small food court selling fast food. All in all a decent place to while away a couple of hours, nothing fancy.

Colombo lacks the usual signature must see sights that cities usually have, but perhaps the one place that sticks out in my mind for things to do in Colombo is the Gangaramaya Temple. This is the oldest and apparently most important temple in Colombo, a sprawling complex that has a mish mash of stuff, a library and a museum with some odd, but interesting knick knacks. 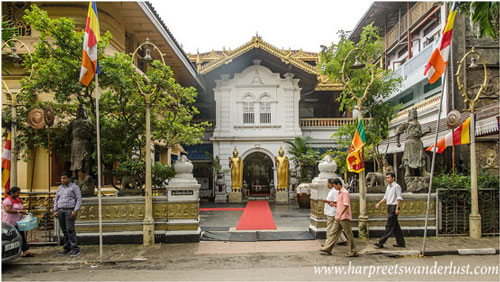 Buddha images, paraphernalia to do with religion and a collection of elephants, both stuffed a real live one too, named “Ganga”, which is sad because the poor creature is chained in one corner of the not so big temple grounds, eating and stomping away. And a collection of cars too, check this Rolls out: 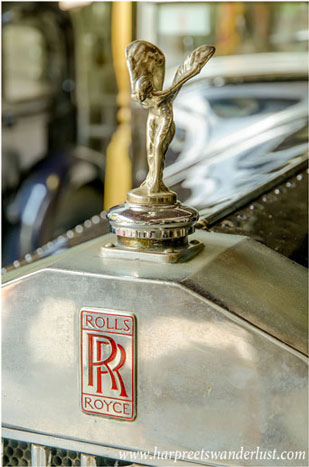 A Rolls, in the temple!

I digress. The usual rules apply at this temple too, take off your shoes, be decently dressed. There is no entrance fee but a 100 Rs donation will not go astray. Amongst the maze of rooms is an image room, with some large and colourful Buddha images, a museum with what is the smallest Buddha image in the world and needs to be looked at through a microscope and, my favourite part of the temple – an area with hundreds of Buddha images. This area is one in which you can spend some time, marveling at the statues. 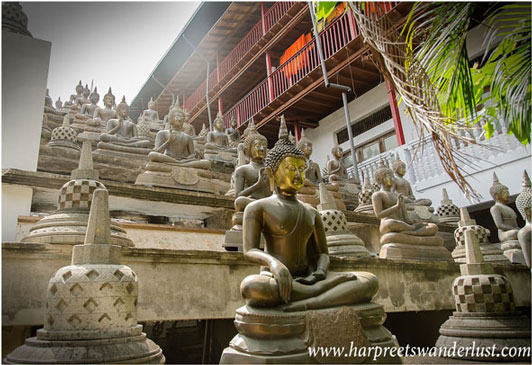 This particular image stood out for me, and for some unexplainable reason, gives me a sense of peace and serenity every time I look at it. I certainly enjoyed taking this picture! 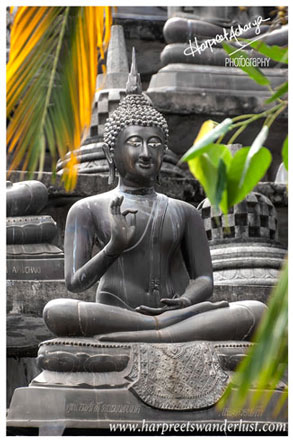 I haven’t spent much time in telling you about the food in Sri Lanka and now would be an opportune time. I believe that the best places to eat at are where the locals eat, so I asked Ravi firstly, what is a Sri Lankans favourite food and secondly, where is the best place to eat local cuisine. The first question was a no brainer – rice and curry, and the second, was Raja Bhojun, a buffet restaurant popular with the locals. So, off we went to indulge in a large rice and curry buffet. Red rice, white rice, fish curry, chicken curry, vegetable curry, pickles, poppadums, a variety of chutneys and they even made hoppers – the bowl shaped dosa like snack with a fried egg in it. Spicy is an understatement for food in this country, but it is not devoid of flavour, and M and I thoroughly enjoyed the fare, though I cant say I was much of a fan of their sweet dish called wattalapam, a coconuty custardy dish that didn’t really tickle my taste buds.

The last meal we had in Colombo was at Chutneys, at the Cinnamon Grand Hotel and probably the nicest Indian food I have eaten in a while. The restaurant gets full so bookings are advised, and I would highly recommend eating here. Chutneys serves food from the South of India – Kerala, Karnataka, Tamil Nadu and Andrapradesh and needless to say, some masala dosas and some biriani was had, washed down with some lassi and a cup of masala tea. 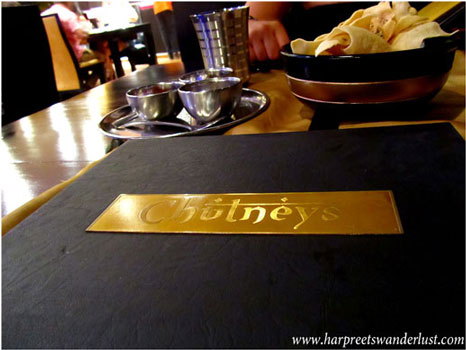 Colombo marked the end of our Sri Lankan odyssey. I must say I thoroughly loved being here, as is probably evident from my writing. Stumbling upon Sri Lanka’s beauty, which still remains largely undiscovered by the rest of the world is truly – serendipity. 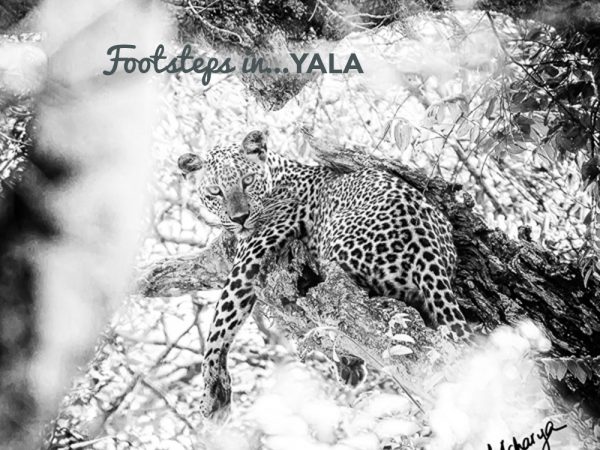 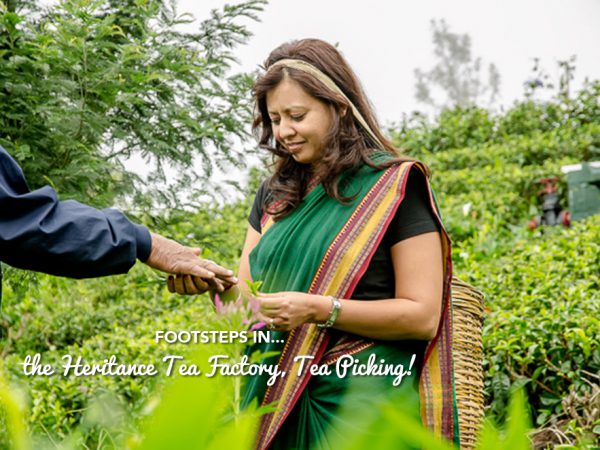 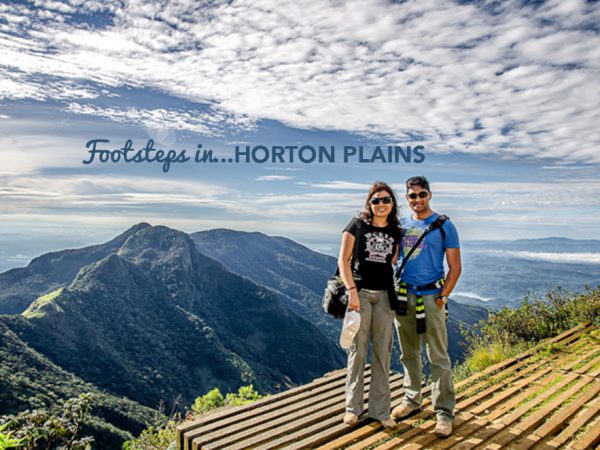